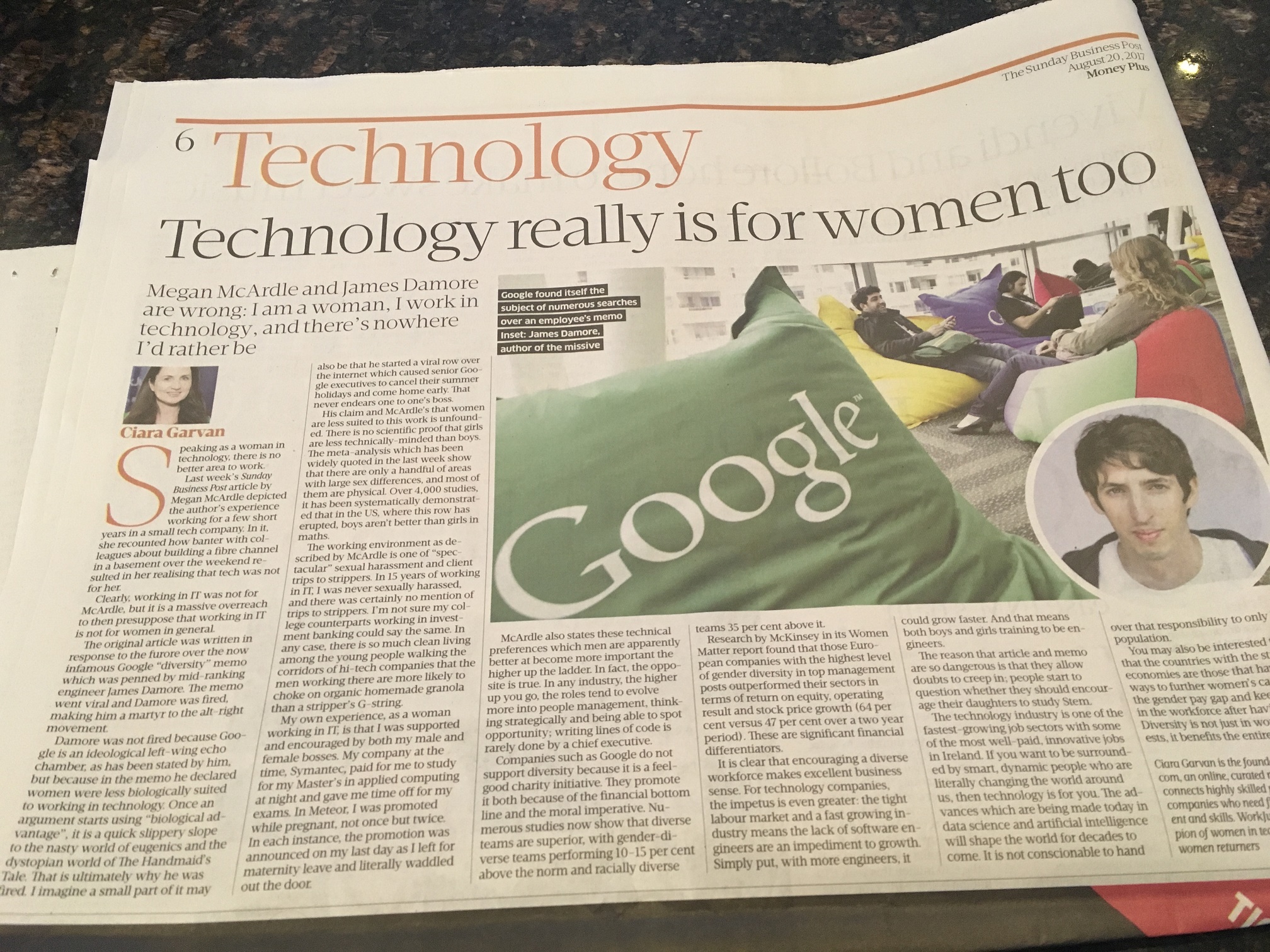 Last Sunday there was an article in the Sunday Business Post which made my blood boil! It was a Bloomberg piece written by Meg McArdle on how women are not suited to work in Technology. That essentially men were better at it and she agreed with the Google anti-diversity memo.

I pretty much disagreed with all of it and so I asked for a Right of Reply. The Sunday Business Post agreed to look at my submission but with no promise they would publish it.

Delighted to find it reproduced in full today in the Sunday Business Post. Here is the link.

They are behind a paywall so have reproduced it here in full as well;

As a woman in Technology, there is no better place to work.

Last week’s Sunday Business Post article by Megan McArdle depicted the author’s experience working for a few short years in a small tech company. In it she recounted how banter with colleagues about building a fibre channel in a basement over the weekend resulted in her realizing that tech was not for her. Clearly working in IT was not for McArdle but it is a massive over reach to then presuppose that working in IT is not for women in general.

The original article was written in response to the furore over the now infamous Google “Diversity” memo which was penned by mid ranking engineer James Damore. The memo went viral and Damore was fired making him a martyr to the alt-right movement. Damore was not fired because Google is an ideological left-wing echo chamber as has been stated by him but because in the memo he declared women were less biologically suited to working in Technology. Once an argument starts using “biological advantage” it is a quick slippery slope to the nasty world of eugenics and the dystopian world of the Handmaids Tale. That is ultimately why he was fired. Imagine a small part of it may also be he started a viral row over the internet which caused senior Google executives to cancel their summer holidays and come home early. That never endears one to your boss.

His claim and McArdles that women are less suited to this work is unfounded. There is no scientific proof that girls are less technically minded then boys. The Meta Analysis which has been widely quoted in the last week show that there are only a handful of areas with large sex differences; and most of them are physical. Over 4,000 studies it has been systematically demonstrated that in the US where this row has erupted boys aren’t better then girls in maths.

The working environment as described by McArdle is one of “spectacular” sexual harassment and client trips to strippers. In fifteen years of working in IT I was never sexually harassed and certainly no mention of trips to strippers. Am not sure my college counterparts working in investment banking could say the same. In any case there is so much clean living amongst young people walking the corridors of high tech companies these days the men working there are more likely to choke on organic homemade granola then a strippers G-string.

My own experience as a woman working in IT is that I was supported and encouraged by both my male and female bosses. My company at the time Symantec, paid for me to study for my Masters in Applied Computing at night and gave me time off for my exams. In Meteor I was promoted whilst pregnant not once but twice. In each instance the promotion was announced on my last day as I left for maternity leave and literally waddled out the door.

McArdle also states that these technical preferences which apparently men have become more important the higher up the ladder. In fact the opposite is true. In any industry the higher up you go the roles tend to evolve more into people management, thinking strategically and being able to spot opportunity; writing lines of code is rarely done by a CEO.

Research by McKinsey in their “Women Matter” report found that those European companies with the highest level of gender diversity in top management posts outperformed their sectors in terms of return on equity, operating result and stock price growth (64% vs 47% over a two year period). These are significant financial differentiators.

It is clear encouraging a diverse workforce makes excellent business sense. For technology companies the imptetus is even greater, the tight labour market and a fast growing industry means the lack of software engineers are an impediment to growth. Simply put with more engineers it could grow faster. And that means both boys and girls training to be engineers.

The reason this article is so dangerous is that it allows doubts to creep in; people start to question whether they should encourage their girls to study STEM. The Technology Industry is one of the fastest growing job sectors with some of the most well-paid, innovative jobs in Ireland. If you want to be surrounded by smart, dynamic people who are literally changing the world around us; then technology is for you. The advances which are being made today in Data Science and Artificial Intelligence will shape the world all of us will live in for the decades to come. It is simply not conscionable to hand over that responsibility to only half the population.

In case you are reading this and think it doesn’t apply to you, you may be interested to know that countries with the strongest economies are those that have found ways to further women’s careers, close gender pay gap & keep women in the workforce after having children. Diversity is not just in womens interests it is in the interest of the entire country.

Ciara Garvan is the founder of WorkJuggle.com. An online, curated marketplace which connects highly skills professionals with companies who need flexibility in hiring talent and skills. WorkJuggle is a proud champion of women in technology and supports Women Returners.

←
Previous Article
WorkJuggle featured in The Irish Times
Next Article
What happens when you create a profile?
→